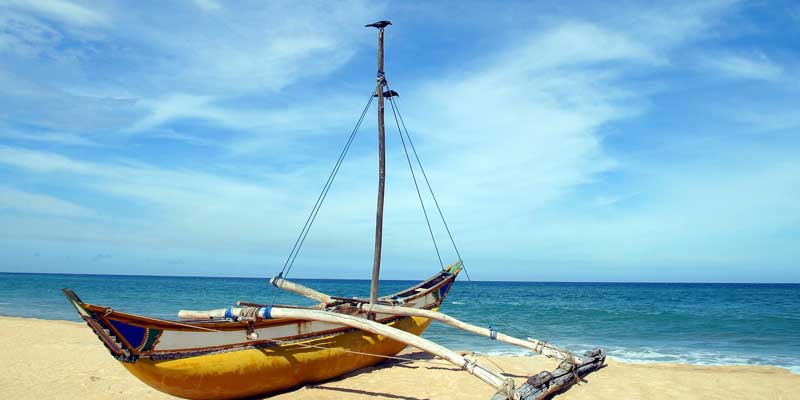 Having arrived in Sri Lanka you will be greeted by both our Travel Design representative and your chauffeur guide at the airport. Take a leisurely drive to Negombo and check in to your hotel. Recover any Jetlag, relax and spend your time at leisure. Relax by the pool.
Dinner and overnight stay. 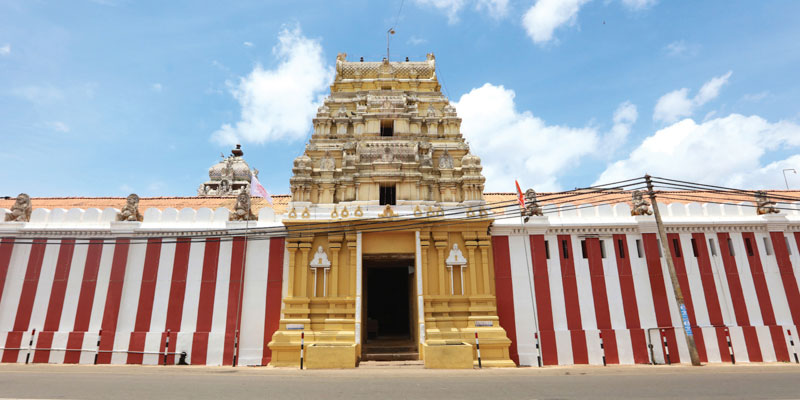 After a scrumptious breakfast at the hotel, transfer to Chilaw and visit theMunneswaram Kovil and Manavari Temple in Chilaw. Manavari is a temple where Lord Rama installed his first lingam as Lord Shiva advised. This was done as a remedy for committing Brahmincide by killing King Ravana. Lord Rama was advised to build 5 lingams in Sri Lanka by Lord Shiva.
The Munneswaram temple is situated at a place where King Rama prayed to Lord Siva after his war with King Ravana.
Devasthanam is open for Dharshan Daily Poojas (Nithya Poojas) / Ushakkala Pooja at 5.30 am / Kalasanthi Pooja at 7.30 am / Uchikala Pooja at 12.00 pm / Sayaratsa Pooja at 5.00 pm / Sandyakala Pooja at 7.00 pm / Ardajama Pooja at 8.00 pm. From 5.30 am to 8.00 pm everyday. The Pooja timing and Dharshan timings will be changed during the festival times.
On completion proceed to Kandy and check-in to the hotel. Spend the rest of the evening at leisure in the hotel. Dinner & overnight stay at the hotel. 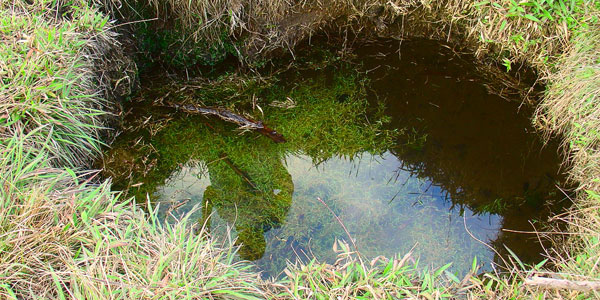 After breakfast proceed to Nuwara Eliya and en route visit the Sitha Pokuna in Pussellawa and Sri Baktha Hanuman Temple in Ramboda. Sitha Pokuna is the summit of the mountain next to Pussellawa and is the site where Lord Hanuman first set his foot on Lanka. Close to Pussellawa there is a barren piece of land in the jungle called Sitha Pokuna, also known as Sitha Tear Pond. Remarkably no vegetation except grass grows on this piece of land which is surrounded by a dense forest. Thereafter visit the Sri Baktha Hanuman Temple. Hanuman is believed to have started his search for Sitha Devi in the Baroda hills. The Tamil word for Ramboda, Rampadai, means “Rama’s force”, this is why Ramboda is believed to be the area where Lord Rama collected his troops. On completion proceed to Nuwara Eliya and check-in to the hotel. Dinner & overnight stay at the hotel. 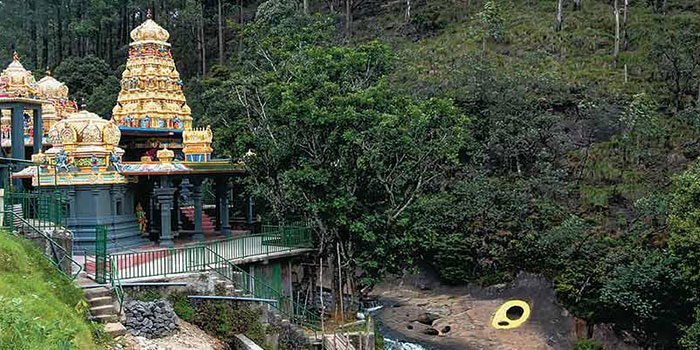 Breakfast at the hotel. Visit the Seetha Amman Temple, which has become the most venerated of all Ramayana Trail sites in Sri Lanka, because it is believed to be the place where Seetha Devi lived most of the time of her captivity on the island of Lanka. It is also unique in a way that it is one of the very few temples dedicated to Seetha Devi. Temple Pooja timings – Morning: 8AM to 1PM and afternoon: 2PM to 6:30PM. Thereafter visit the Hakgala Botanical Gardens, previously known as Ashoka Vatika. After Seetha refused to stay in Ravana’s magnificent palace she was transferred to Ashok Vatika or Ashokavanam where she lived under Ashoka trees. It was here that Ravana’s wife Mandodari visited her and that Hanuman met her for the first time, identifying himself with the finger ring of Rama.
Next you will be visiting Divurumpola which is said to be the location where Seetha Devi underwent the famous fire ordeal Agni Pariksha, in order to prove her chastity. Divurumpola is said to have been the location of this episode, because the Sinhalese name means a ‘marketplace of oath’. On completion return to the hotel for dinner and overnight stay. 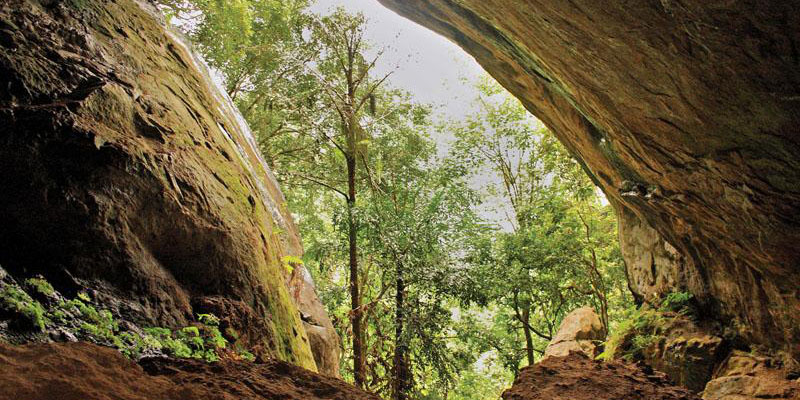 After breakfast check-out from the hotel and transfer to Ella. En route visit the Dova Rock Temple and Ishtripura Caves close to Welimada. Dova is believed to have served as a refuge of the famous King Walagambha in the first century BC. At the rear of the Buddhist cave temples and image houses there is a small stupa inside a cave. This stupa marks the entrance, now locked, to a tunnel which is said to be 11 kms long and leading to the Ravana Ella cave and to be a part of an underground network of tunnels already built by Lanka’s legendary King Ravana.
Thereafter proceed to Ishtripura Caves. It is said that King Ravana shifted princess Sitha to this cave as a precautionary measure after Lord Hanuman’s advent on Lanka. Legend has it that Seetha Devi took a bath in the nearby stream and afterwards dried her hair sitting on a rock and put clips to her hair, hence this rock is known as Konda Kattu Gala, Konda means hair, and Kattu are clips.
Proceed to Ella and check-in to the hotel. Dinner & overnight stay at the hotel. 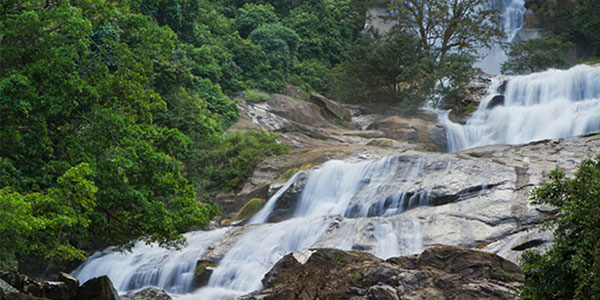 After breakfast check-out from the hotel and proceed to Tissamaharama via Wellawaya. En route visit the Ravana Falls, Ravana Caves and Yudaganawa. According to the legend, it is said that King Ravana had kidnapped princess Seetha, and had hidden her in the caves behind this waterfall. It is also believed that Rama’s queen bathed in a pool that accumulated the water falling from this waterfall. To visit the Ravana caves, the vehicle has to be parked and the rest of the way has to be done by foot. The climb to the Ravana Cave is quite tough with about 650 steps – uneven steps, many of them are quite steep; some places has no steps at all – just on steep rocks. The cave is large and it was very easy to imagine the place as the safe hiding place it once was. There had been many tunnels leading to various places around the area which are now, of course, buried within the sands of time quite literally. These tunnels served as a quick and safe means of travelling through the hills.
Then proceed to visit Yudaganawa. The Ramayana Trail legend has it that Yudaganawa (instead of the formerly identified Yudaganapitiya in the northern highlands) was the arena for the final battle between Rama and Ravana. It is said that the destruction caused by this war is the reason why this piece of land can never bear any vegetation again.
Proceed to Tissamaharama and check-in to the hotel. Dinner & overnight stay at the hotel. 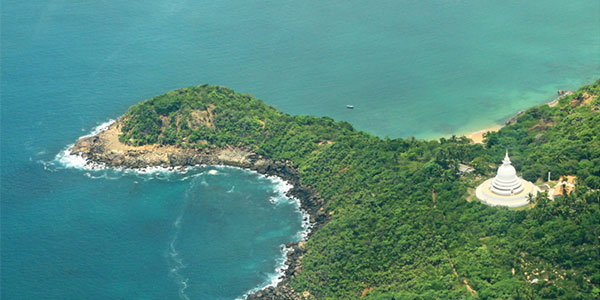 After breakfast proceed to visit the Kataragama Temple. Lord Indra is said to have given Lord Kataragama orders to join the battle at the last day of the war to protect Lord Rama from the powerful wrath of Lanka’s demon king Ravana. Be prepared of a bit of a walk to the temples, as vehicles cannot approach beyond the gate. You’ll need to take off your shoes, so bring socks to protect your feet from the hot ground.
En route to Unawatuna visit the Ussangoda National Park. Ussangoda is a strange coastal area because of its lack of trees. Its serpentine rock contains heavy toxic metals. But according to the Ramayana legend, there are two more explanations for the baldness of Ussangoda. After meeting Seetha Devi, Lord Hanuman provoked the mighty King Ravana and his army of Rakshasas. It resulted in Lord Hanuman’s tail being set on fire by Rakshasas. Hanuman in turn went on to torch parts of King Ravana’s empire with his burning tail. Ussangoda is said to be one of these burnt areas. Besides the Ramayana Trail legend has it that earlier on the Ussangoda plateau was used an airport by King Ravana for his Dandu Monara peacock chariot, before Hanuman devastated the landing site.
Visit Rumassala hill 3 km east of Galle is the landmark of Unawatuna beach because of the picturesque white Buddhist dagoba on top of it. Rumassala rock is one of the five Sri Lankan spots believed to originate from parts of Mount Dronagiri.
Proceed to Unawatuna and check-in to the hotel. Dinner & overnight stay at the hotel. 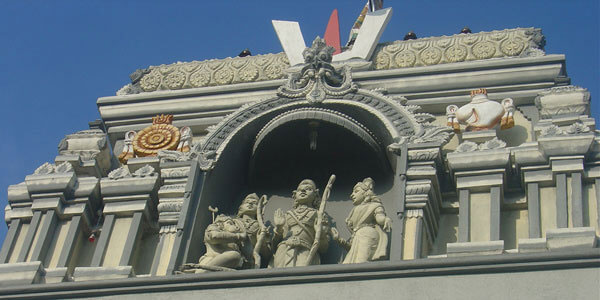 Have breakfast at the hotel. Then check-out from the hotel and transfer to Colombo. Visit the Panchamuga Anjaneyar Temple in Mount Lavinia. It is the first Anjaneyar Temple (dedicated to the God Hanuman) in Sri Lanka and also the only Panchamuga (five faced) Anjaneyar Temple in Sri Lanka. It is the only temple in the world to have a chariot for Anjaneyar. The chariot festival is held annually end Dec/ beginning of January. Although the name Hanuman is used in North India, in South India he is known as Anjaneyar. Hanumans mother’s name is Anjan – Thus Hanuman is known as Anjan + Aiyar = Anjaneyar. The temple is open daily from 5:00 am. Morning Pooja is held at 8:00 am. Noon Pooja at 12:00 noon and closed at 1:00 p.m.
Check-in to the hotel in Colombo. Dinner & overnight stay at the hotel. 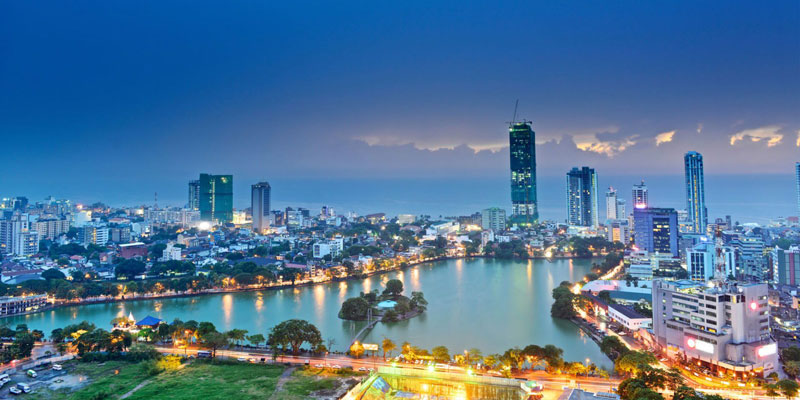 Breakfast at the hotel.
Check-out from the hotel and transfer to the airport in time for the departure.

Where can you stay 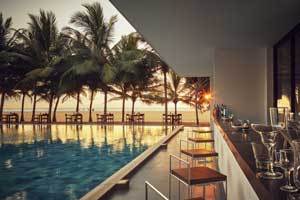 Nestled in the picturesque hill top, Amaya Hills proudly sets the benchmark for resorts in Kand 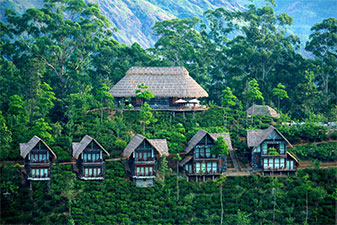 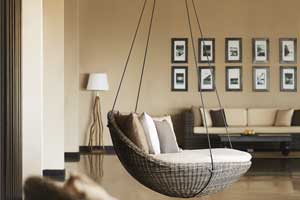 Jetwing Yala a beacon of light in the deep South with a combination of awe-inspiring wildlife,

Inquire for Tales of Ramayana