Remoteness from day to day life is what we promise through this tour plan which is a celebration of love and what you need is to sit back and relax, enjoy life with loved one. Celebration of Romance includes relaxation, spa treatments to uplift your self-esteem and as well as rejuvenate your mind, body and soul. 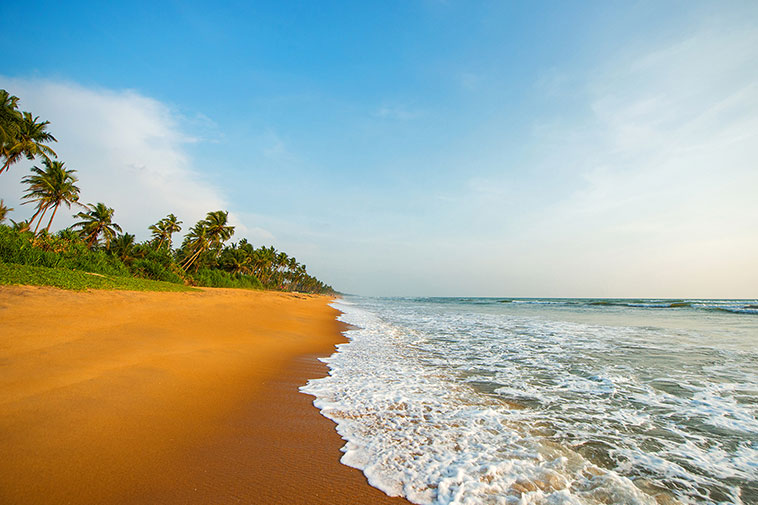 Upon arrival at the Bandaranaike International Airport, you will be warmly welcomed by our Travel Design airport representative and will be driven to the small sleeping fishing village of Negombo, also known as the “Little Rome”. Check in at The Beach, where you will be enjoying your very first couple spa treatment. With the finest art of Spa and therapy of experienced staff at The Beach Resort, a small luxury hotel, you will get to experience a walk along the beachside of Negombo, walk along the hotel road in the evening, experiences some of the pubs and clubs along the way. Dinner and overnight stay at The Beach 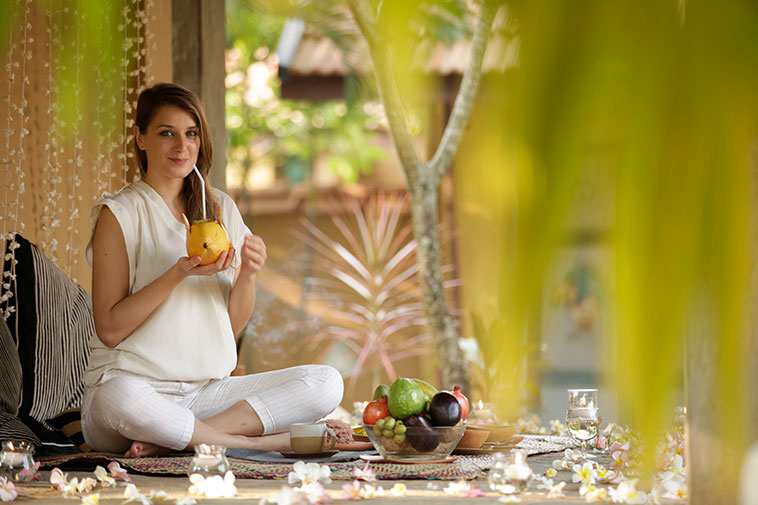 After breakfast at the resort, proceed to Ayurveda Pavilion, where you get to experience a facial together with an organic lunch at the Ayurveda resort. Spend the time at leisure; relax by the beach overlooking the mighty Indian Ocean. Try some of the finest Japanese Cuisine at the “Sushi Bar” where you get to experience first class Sushi and Sashimi being served at competitive prices. Overnight stay at the hotel 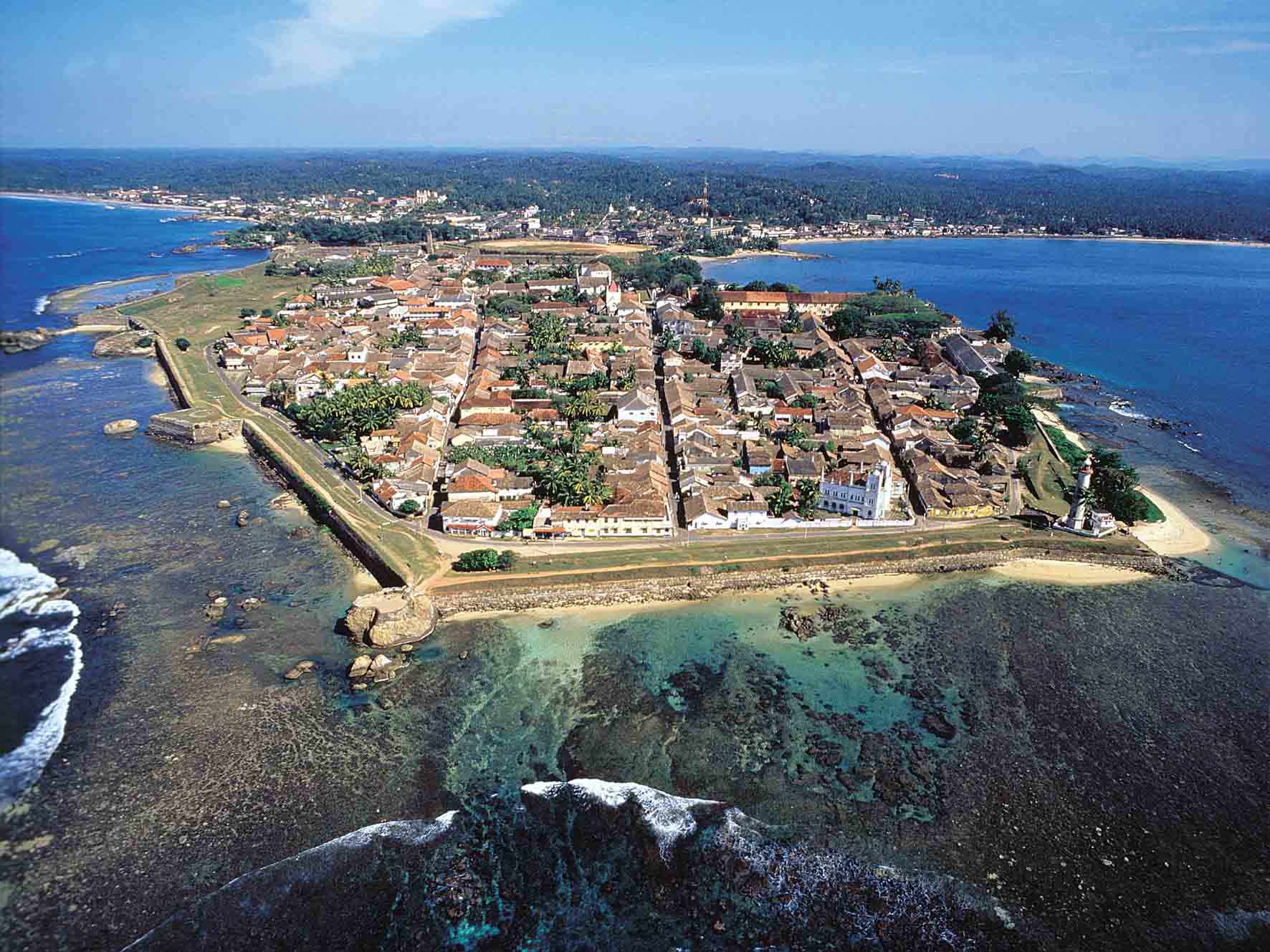 After breakfast at the resort proceed to Galle; one of the most exciting destinations for a relaxed vacation, away from the busy streets and schedules. Enjoy another couple treatment at the finest spa of Lighthouse Hotel.
Spend the evening at leisure; enjoy a walk at the Galle Fort, a masterpiece and one of the only remaining Dutch Fortresses in Asia. Not to forget to try some of the finest cuisine from Nihal’s by the Spa. Overnight stay at the resort 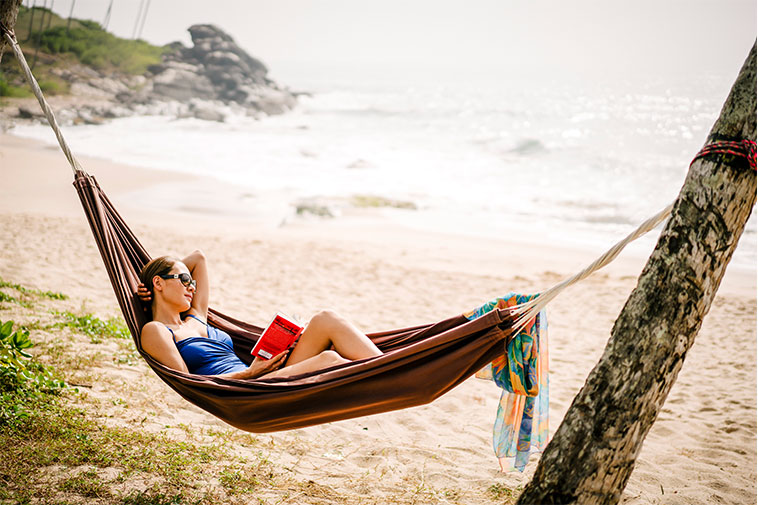 After breakfast at the resort, check out and proceed to Tangalle, Anantara Resort; Hidden on a rocky outcrop along a secluded stretch of Sri Lanka’s southernmost coastline, Anantara Peace Haven Tangalle Resort boasts the most unique location of any hotel in this beautiful corner of the island. Set amidst a coconut plantation and golden crescent shores with glorious Indian Ocean views, the resort offers a naturally exclusive hideaway for exotic beach life in a tranquil world of your own, as well as living out dreams of adventure with easy access to iconic cultural sites, spectacular national parks and whale watching destinations. Overnight stay at the resort, you have the option to experience the Spa this evening 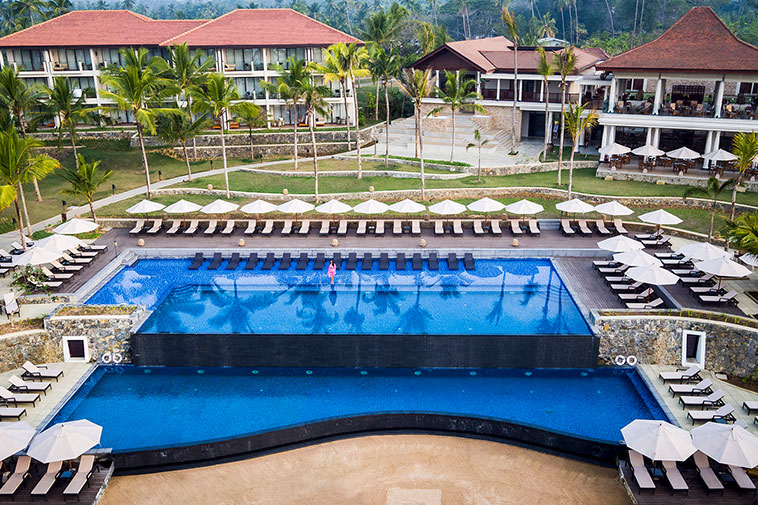 Enjoy a hearty breakfast at the main restaurant, followed by a relaxing swim by the pool. In the afternoon enjoy a visit to Mulgirigala Temple. Spend the evening by the Spa and pool or unwind by the finest beach of Tangalle. Overnight stay at the resort 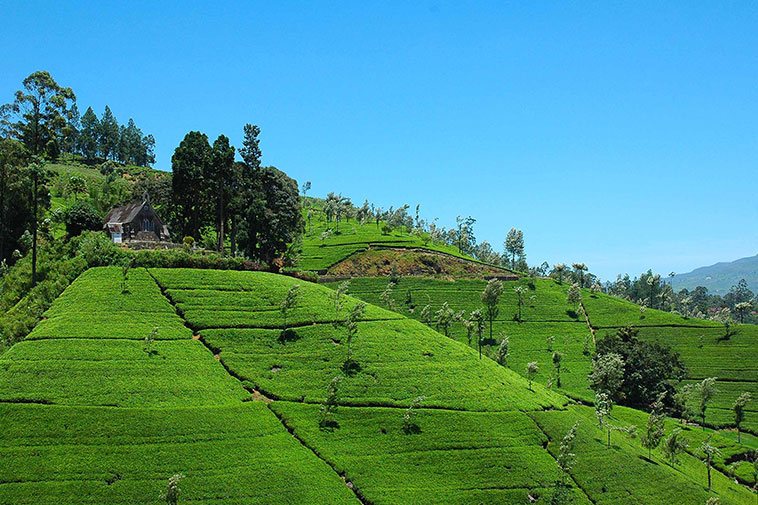 After a wide spread buffet for breakfast at Anantara Tangalle, check out and proceed to the hill side of Dick Oya, less crowded, less exploited with tourists, this is an old world charm where during the British colony in Sri Lanka tea plantation was the main agricultural industry and with it was born the life of a tea planter spent in a luxurious bungalow where a butler catered to all cuisine needs and pampered surrounded by the lush greenery of the virgin mountains, own flower gardens, own tennis court and a billiards board kept the guests entertained with in-house music. The very same atmosphere can be experienced at Governor’s Mansion where your choice of cuisine will be prepared by the butler. Check in at the beautiful bungalow of Governor’s Mansion and learn about the historic events that has made the bungalow’s history a phenomenal one. Try some of the finest steak meals at the mansion for dinner while sipping some of the finest in house wines. 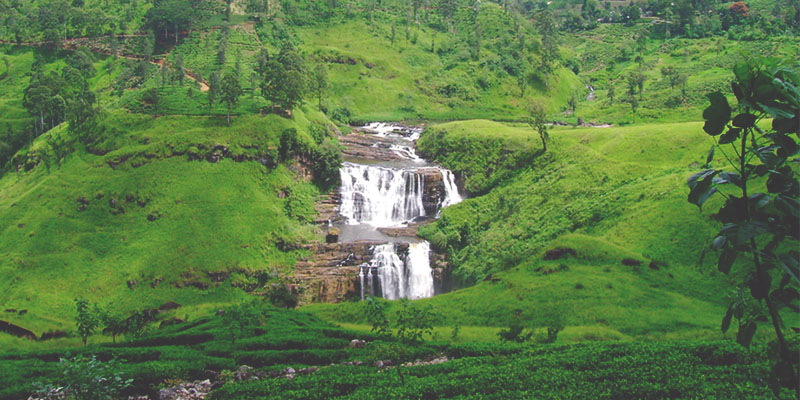 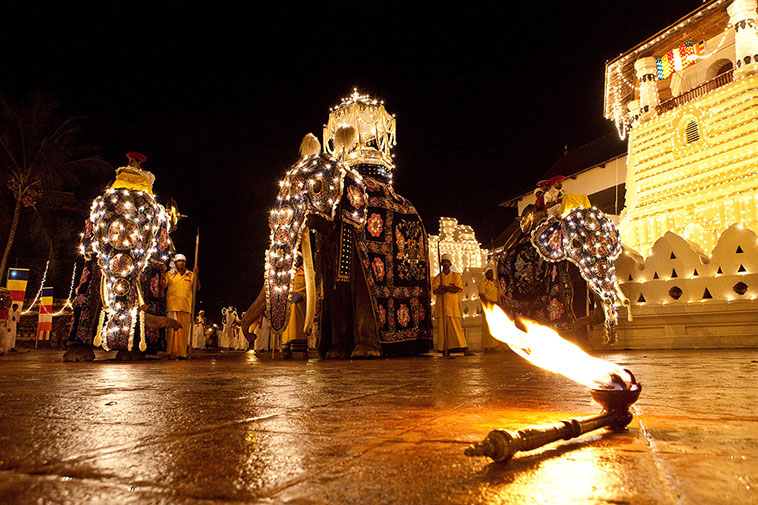 After breakfast at the bungalow, check out and proceed to Kandy; a proud heritage of Sri Lanka and a UNESCO World Heritage Site, which is also a bustling hill country with a weightage for the Buddhist Culture in Sri Lanka. Kandy was made a world heritage site in the year 1988 and the city lies on a plain surrounded by virgin hills and tea plantation.
Check in at Santani; lasting wellness is achieved by bringing oneself into balance, with nature as well as through the nurture we give ourselves and receive from others. Meaning “in harmony with,” Santani offers a uniquely restorative sanctuary where this belief guides everything we do. Wellness programs in Ayurveda, detox and cleansing, yoga and relaxation combine on site pampering and rejuvenation with enlightened learning for healthy living long after you leave our invigorating surroundings. Overnight stay at the resort 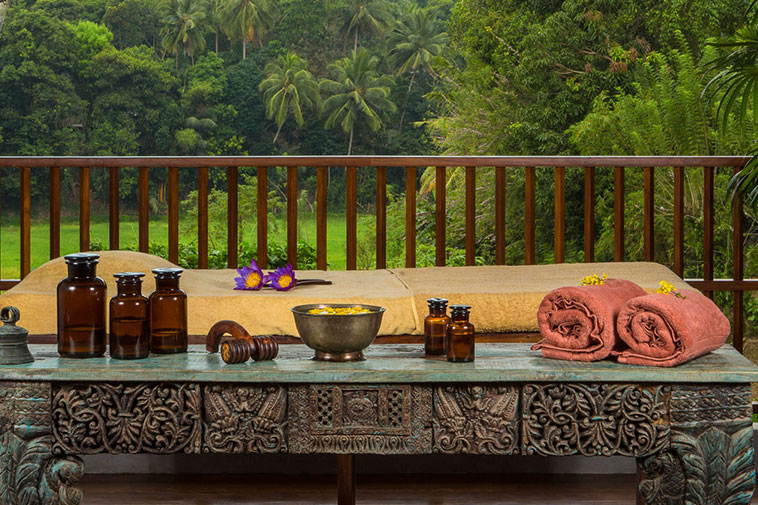 Designed to free the mind while treading as lightly as possible on the earth, the private sanctuaries blur the distinction between indoors and out, to encourage you to rest, relax and meditate while inhaling the purest, freshest air and living within in this pristine, truly inspiring scenery that surrounds us. Enjoy your breakfast at leisure. Choice and freedom are essential to sustainable wellness. Whether you like juicing, vegetarian, vegan and raw foods or you prefer heartier wholesome fare, Santani is about taking pleasure in the locally sourced, organic food you eat here.
Harmonizing health science innovations from around the world with the most effective treatments of Sri Lankan Ayurveda, Santani offers a thoughtful, sustainable approach to wellness: we pamper your body to revitalize you here and we educate your mind so that you leave with healthy habits and practices which allow you to enjoy greater mental, spiritual and physical well-being for years to come. Overnight stay at Santani 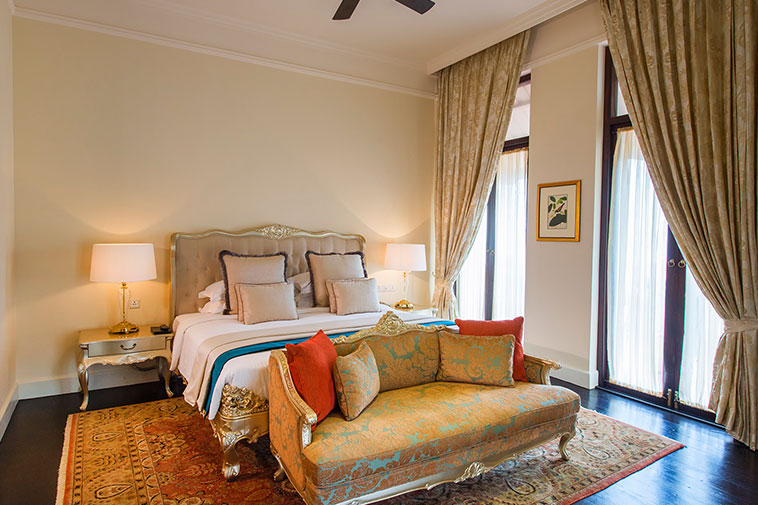 After breakfast at the hotel proceed to Colombo, the commercial capital of Sri Lanka. Sri Lanka’s largest city, it is located on the west coast and draws together all the cultures, religions and influences of foreign lands into a pot-pourri of sounds, smells and a kaleidoscope of color. The original traders and settlers – the Arabs, Portuguese, Dutch and the British have left in their wake churches and monuments, names and religions, costumes and food and smatterings of their languages which have been absorbed into the speech of the Sri Lankan. Enjoy a treatment at Sri Lanka’s leading Spa’s; derived from royal relaxation, rejuvenation and healing rituals of Ayurveda, practiced in the grand palaces of Ceylon, comes the range of treasured formulae and rituals from Spa Ceylon, to hydrate, treat, purify and soothe your body, mind and soul. Overnight stay at Colombo after some last minute night shopping 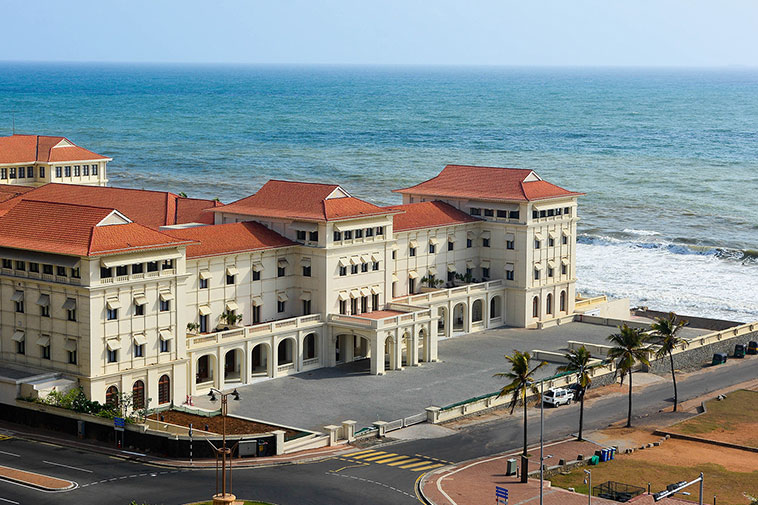 As all memories are made with concluded journeys, your experience in Sri Lanka comes to an end with pondering memories of the most exciting days of your life spent with loved one and someday for the journey to be recalled with a blissful smile on your face. Your chauffeur guide will drive you safely to the airport for your flight home.

Where can you stay 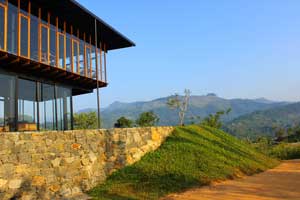 Santani offers a uniquely restorative sanctuary where this belief guides everything we do. 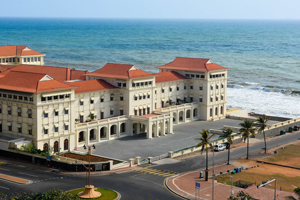 Sri Lanka’s iconic landmark, the Galle Face Hotel, is situated in the heart of Colombo, along 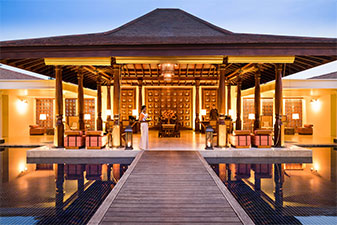 Hidden on a rocky outcrop along a secluded stretch of Sri Lanka’s southernmost coastline, Ana